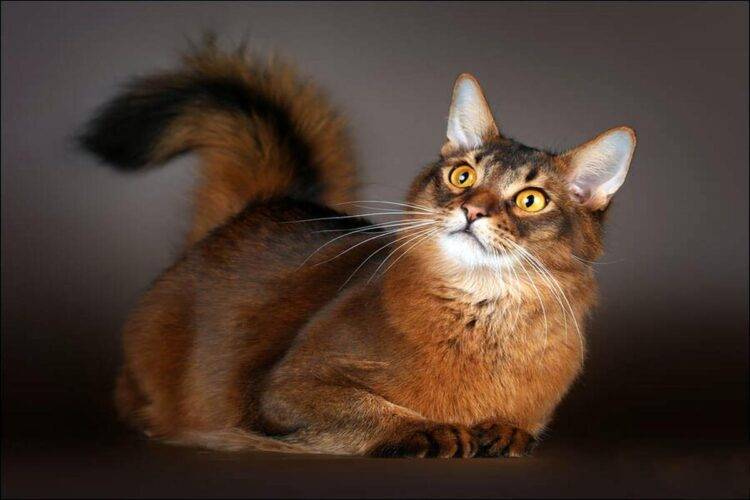 Contents:
Somali cat – a handsome, truly a Royal pet with the appearance of a Fox and the nature of the perfect pet. Somalia is always the soul of the company, starts a friendship with people and with Pets, and in addition, striking a sharp mind and almost human habits! 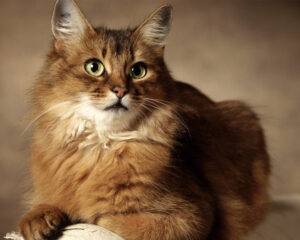 The Somali cat has a Fox appearance and a Royal article. This pet is of medium size, maximum weight up to 5.5 kg. Somali cats like the Abyssinian, the Somali but the more rounded contours of the body, and longer hair.

Body long, sleek, close to the Eastern type. The back is slightly convex. The limbs are slender and strong, compact paws. Head when viewed from the front is triangular in shape with rounded corners, the face also not pointed. The eyes are large, almond-shaped, with the rim. Above each eye, there is a visible vertical mark (the balance drawn on the forehead in the shape of the letter “M”). Eye color can be Golden, amber or green.

The ears of Somali cats are large, erect, rounded at the tips. Desirable tassels on the ends and mark a “fingerprint” on the backside of the ear. The tail greatly resembles the Fox: it is long and very fluffy.

Semi-long coat, dense and soft. On the muzzle, the front of the shoulders and limbs shorter hair, and on the upper part of the chest, rump, and tail longer. The long coat forms a beautiful collar and pants. 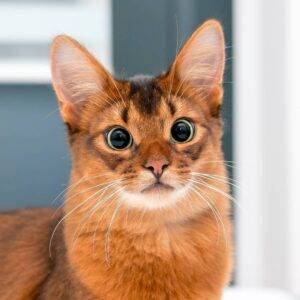 The Somali cat is often compared to their closest relatives the Abyssinians and in appearance and character. Resemblance we have mentioned above, and with regard to nature, the Somali cat is more sedate and calm than its ancestor.

The “Somali” even-tempered temperament and a sharp mind. It agile and playful and rather calm cat. Due to the living nature and friendliness, she is wonderful with children and Pets, easily makes friends even with dogs. 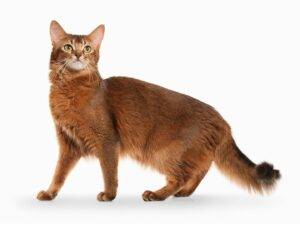 Somali cats are very affectionate and love attention, and can even get jealous of the owner of their inherent sense of ownership. In addition, Somalia differs sharp mind for them is not difficult to learn how to open the door to the room, turn on the water, open the cabinets and get them interested in the subjects of the most secluded and inaccessible places.

As a rule, these Pets become real family members, the eternal soul of the company, best friends and the real pride of its owner. 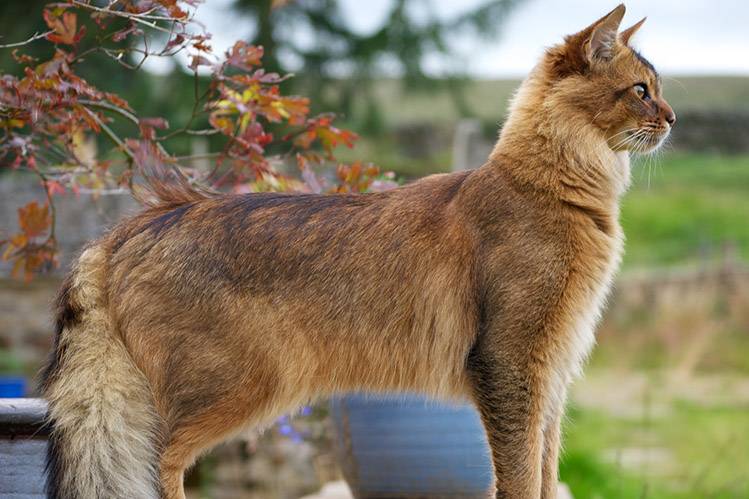 Somali cats are in good health and strong immunity. Some experts say the tendency Somalia to autoimmune hemolytic anemia (AIHA), however, this is only a theoretical assertion, unsubstantiated by relevant research results.

With proper maintenance, the life expectancy of a Somali cat on average is 14-16 years.

The Somali cat is vulnerable to cold, but the constant content in a city apartment is not the best condition for it.

Somalia is an excellent hunting, and for a full life, he needs to support your natural skills. The perfect place for this pet would have a country house with a private enclosed yard or garden, so the little huntress could from time to time freely walk. 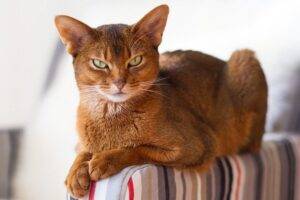 The rest of the Somalis care standard. Wool enough to brush 1 time a week. As necessary to clean the ears and shortened claws. Proper nutrition, routine vaccination, treatment against parasites and preventive examinations are the basics of good health of the pet.

We can say that this breed was developed accidentally while crossing Abyssinians with longhaired cats.

First, the resulting fluffy kitten’s breeders perceived as defects and excluded from further line breeding. But in 60 years of Canadian specialists interested in “defective” offspring, decided to consolidate the gene is semi-long hair in Abyssinians. So work began on a new breed, and in 1972, Somalia took part in his first show, and in 1978 the breed was recognized by CFA. 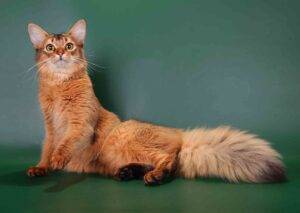 By the way, the name of the breed owes to the state of Somalia, adjacent to the homeland of the Abyssinians – Ethiopia.

Today, Somali cats are considered one of the most beautiful breeds in the world. 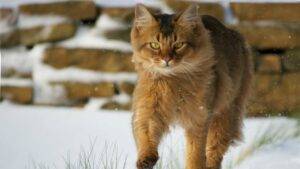