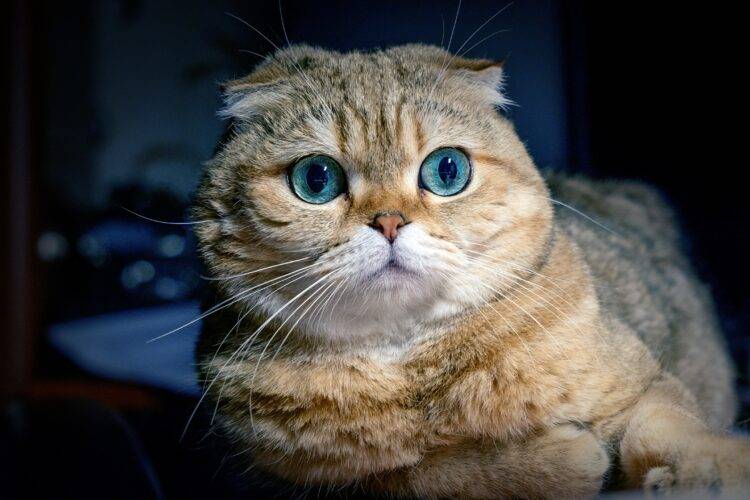 Scottish fold cats have an original appearance and perfect character. This is a good, loving, affectionate, and loyal Pets, which, moreover, love to stand on their hind legs, like meerkats, and sleep on the back. The Scottish fold is easy to care for and get along well with other Pets.

Scottish fold (Scottish fold) is one of the most popular breeds in the world. It’s a pretty cat with an unusual appearance and a wide palette of color. Their weight is from 2.5 to 6 kg.

The Scottish fold is a sturdy, stocky body type, short torso, with smooth rounded curves. The head is round with slightly convex and rounded cheeks (adult males can be saggy cheeks), snout rounded, with a strong chin. The eyes are large, round, eye color corresponds to the color. Ears small, with rounded tips, folded forward. The tail is broad at the base and tapering to the tip, not very long, its length does not exceed 2/3 of the length of the body.

The coat is straight, dense and glossy, can be short or of medium length (two species). Open to all color options, except lilac, chocolate, and color of Siamese cats.

Have a Scottish fold a great character. This is a good, friendly, affectionate cat that bonds strongly to his family and his home, and gets along well with all others. Often Scottish fold becomes the best friend not only the second cat in the family but the dog. They are unpretentious, undemanding, easy to catch the mood of humans and other animals, never imposed, and not get bored. While the Scottish fold is a very affectionate and appreciate the care that always responds with trust and loyalty. And yet, despite the peaceful temperament, they love to play, including with children.

Overall, the Scottish fold is a quiet and modest Pets, and their noble character and habits never cease to amaze. For example, the “Scots” like to get up on its hind legs and stretch is our host, trying to see them interested in the subject matter, and it doesn’t cost them any effort. Homemade ricotta (Scottish very similar to these animals in their rack) often sleep on the back, which cannot but touch the hearts of others.

The Scottish fold is good, hand and trusting Pets that make an invaluable contribution to the atmosphere of coziness and harmony in your home.

Have a Scottish fold from nature good health, but these cats are strongly advised not to breed with other representatives of the same breed as the possible offspring are highly likely to develop skeletal anomalies. Breeding based on breeding Scottish fold and Scottish straight ears also allowed interbreeding with British and American Shorthairs.

The lifespan of a Scottish fold to an average of 14-15 years. With the right content, they often live up to 20-22 years.

Caring for a Scottish fold is quite simple. Soft wool cats should be brushed once a week and daily while shedding. Regular inspection and periodic cleaning of pet’s ears require. It is also necessary to strictly adhere to proper diet and do not overfeed the animal, because “Scots” full-bodied. In General, the care of the Scottish fold is standard.

The birthplace of a cat with unusual ears and a perfect character is Scotland (which becomes clear already from the name of the breed).

The impetus for the emergence and development of a new breed was an unexpected mutation of kittens born in 1961 in Perthshire. Once farmers William and Mary Ross noticed her neighbor’s unusual pet: a white cat with hanging ears named Susie. This feature interested them, and they decided to use Susie for breeding. Soon the cat brought offspring, one of the kittens was also hanging ears. Later, this kitten brought to British Shorthair and so was born the so popular today the breed.

Unfortunately, the first representatives of the Scottish fold often suffered from various diseases. But professional breeding with the participation of British Shorthair, American and exotic cats solved his original problem and now the “Scots” do not have the genetic propensity to serious diseases.

Today Scottish fold is one of the most popular cat breeds in the world.