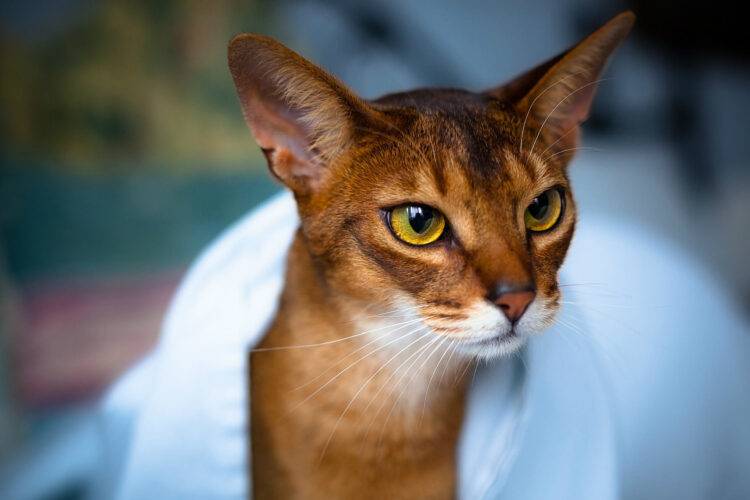 In Abyssinian cats with radiant, lustrous eyes, a beautiful palette of color and energy and optimism absolutely inexhaustible. These beauties know how to be not only a cat’s independent, but very loyal, faithful and reliable friends. They are very attached to their owner and happy to make friends with other Pets, whether it be another cat or a dog – Abyssinians will win any heart!

The Abyssinian is an incredibly elegant pet with Golden sequins in the eyes, velvety fur and a Regal bearing. Height: average weight is from 4 to 7.5 kg.

Abyssinian cats are incredibly flexible, they are composed harmoniously and gracefully, their movements beautiful and graceful. Eyes aby are very beautiful, almond-shaped and sparkling Golden, green or amber color. Ears large with rounded tips, the tail is long, tapering to the tip.

The breed includes two varieties: Abyssinian, English (Eastern type) and Abyssinian American (European type). In the first variety, the head and body a little more elongated, whereas cats are of European type a little larger, but more compact.

The coat of the Abyssinian is short, thick and dense, the color is sable (ticked): each individual hair 2-3 colored rings, a darker alternate with the lighter, the tip of a hair dark. Color can be wild (rabbit), blue, silver, red, yellowish-brown, sorrel (copper-red background with tan stripes). In the neck, stomach and on the inside of the legs colour is uniform, ticking absent.

Overall, Abyssinians have a Regal and noble appearance, you can observe these cats endlessly. 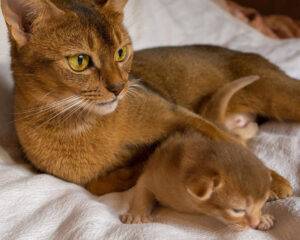 Graceful, elegant appearance Abyssinians corresponds to their character. It is mobile, inquisitive, very playful, yet balanced and well-bred cats that will never bother a busy owner and always appreciate the attention and care.

Abyssinians are focused on the person they contact and affectionate, but, like all strong members of the cat, to maintain independence and freedom. To win the absolute trust of this proud pet is not as easy as it might seem at first glance: a cat has a strong and noble nature, and in the man she is looking for the same qualities. However, once the pet will open your heart, you will understand that to find a friend more worthy and more reliable Abyssinian, is almost impossible. This cat clearly feels the mood of the person, support in difficult times and adds warmth and tenderness in the bright days. She bonds strongly to its owner and difficult to tolerate loneliness. This active pet is always striving to be the center of attention and charges with positive emotions and attitude to everyone around him.

The majestic but friendly Abyssinian cats get along well with other cats and even dogs, never scratch without extreme reason and are very sensitive to your friends. The house in which he lives the Abyssinian is always filled with optimism, harmony and comfort, these incredible cats that will win any heart. 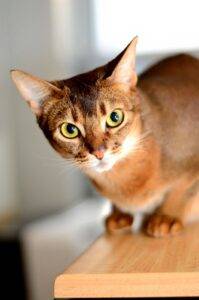 In Abyssinian cat’s good health, with proper maintenance, the average life expectancy of the Abyssinian is 20 years. In the past, the breed was often found genetic diseases (diseases of blood, kidney and eye disease), but with proper breeding, they are easily eradicated therefore to buy kittens, it is recommended only in trusted nurseries.

To care for the Abyssinians very simple. The hair enough to comb once a week (and often during molting), special attention should be paid to the ears of the pet and the contamination of which it should be removed regularly soaked in boiled water with a napkin.

Once a week we recommend a full home inspection of your pet and in case of detection of ailments in a timely manner to go to the vet. 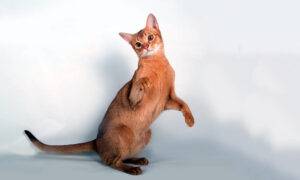 The Abyssinian is a very old breed, so old that to establish its exact origin is impossible. It is believed that the homeland of the breed is the African country of Abyssinia (now Ethiopia) in her honor and named the breed.

Because of the impressive similarities with the sacred cat of Ancient Egypt many researchers believe that the Abyssinian first appeared on the banks of the Nile. There is even a little legend about the appearance of this breed in the country of the Pharaohs. According to legend, Ramesses II first saw these unusual cats during a visit to the Abyssinian king, and was conquered by them. He begged the king to give him a few Pets, until the king finally agreed. So, Ramesses II brought the Abyssinians in Egypt.

However, cats are similar in color lived not only in Africa, for example, but they were also widespread in India and other Asian countries.

In England, the Abyssinian cat was brought in 1868. In 1871, the Abyssinian named “Zula” was presented at the exhibition in London’s Crystal Palace, he immediately attracted everyone’s attention and gave a new step in the development of the breed. Subsequent breeding work has consolidated and improved the quality Abyssinians, and in 1882 the breed was officially recognized in England.

Since Abyssinian cats are quickly gaining popularity. Worldwide opened clubs of fans of breed, soon to breed Abyssinians began throughout Europe. Today the Abyssinian is one of the most popular and widespread breeds in the world.