Real aristocrats with white hair and bright eyes recently graced with the grace the palaces of French kings. Today it’s a beautiful Pets, very affectionate and intelligent, which costs nothing to learn how to turn on the light in the apartment, open doors and bring the owner the right things. Curious, friendly cat friendly with other Pets and make the house unique atmosphere of warmth and coziness. 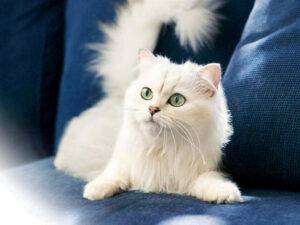 It is difficult to find a more aristocratic breed than Angora cat or, as it is called, Turkish Angora. Real, natural thoroughbred originally from Turkey, until recently, adorned the courts of French kings, and today are the pride of the people of the world. This graceful, elegant Pets of medium size, weight not exceeding 5 kg.

Angora cats have a graceful, harmonious body, long and muscular body, thin bones. Eyes very beautiful, big, almond-shaped and slightly slanted, can be any color, but always in harmony with the coat colour. The ears are large, pointed, the tail is long and fluffy, in proportion to the body. Wool from the Angora cats of medium length, silky, thin, with sparse undercoat. More thick, slightly curly hair on the neck, chest and rump forms a beautiful collar and lush pants. 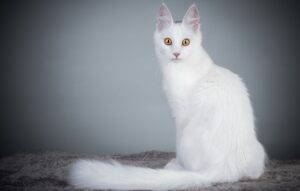 Many believe that Angora cats snow-white hair and blue eyes, however, this is only one of the variants of color, though most valuable. In fact, the palette of color this breed is very wide, not only allowed chocolate, honey, violet and yellowish-brown color, and the colors typical of Burmese and pointed.

Overall, Angora is a very elegant cat with smooth curves, her whole appearance has always been associated with grace and ease.

Angora cats are avid followers of an active lifestyle, they are very mobile, inquisitive and smart. Always be in the spotlight for Angora – life motto, these Pets are incredibly contacts, sociable, playful and do not like to be alone. 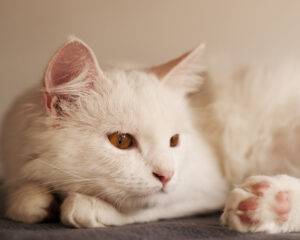 Despite the inherent independence of cats, Angora strongly tied to the owner and tries to be around him as often as possible. Often smart pet brings the owner the right things and is eager to please him.

Thanks to the lively temperament and intelligence, Angora cats love to explore the world and learn. For example, turn on the lights and open the doors for them – it’s not an outlandish skill, and it is a routine thing.

Energy and activity Angora cats in harmony with balance and calm. If the owner is not in the mood to play pet calmly settled on his lap or sleep next to you, curled up. In addition, the Turkish Angora is very friendly, they like to chat with other cats and familiar dogs, unless, of course, and they, in turn, to show friendliness and interest.

Overall, this is a cheerful and very affectionate cat, loving to be pampered and to / meow. They fit good, responsible, who will be able to give enough attention and care to the sensitive and unsuspecting Pets. 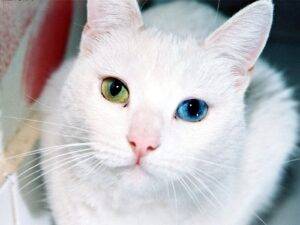 The breed is known for its cleanliness and accuracy. These cats require minimal care and, thanks to a rare undercoat, almost do not cause problems with the molt. Wool Pets enough to brush 1 time a week (and often during molting).

For good health active cat needs the free space that she could like to run and play. 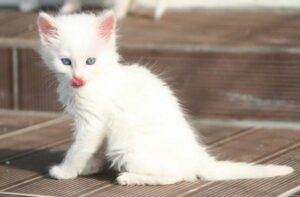 Home to incredible cats in Turkey, in honor of the capital of the country (the old name Anchors – Angora) and was named breed. Ancestors Angora cats are considered wild cats of the middle East. From them did the van cats, which are often confused with Angora. However, despite the strong external similarity, these species have differences in the exterior and at the gene level, although they belong to the same Mediterranean genetic group.

In Europe, Angora cats were imported in the 17th-century Italian traveler Pietro Della Valle. The smartest Pets with white fur and blue eyes immediately became the darlings of the aristocracy and the first confidants of kings. However, in the 19th century, the breed was on the verge of extinction, giving impetus to the development of the Persian breed, catching the Angora popularity. After the Second world war the situation deteriorated even further, and for further breeding European breeders had to remove cats from Turkey, where national pride was under the protection of the law. His revival of the breed owes the American breeders Classic, which acquired a few purebred Angor in the Ankara zoo and marked the beginning of a new line of breeding.

In 1973 the breed was officially recognized by the CFA, and in 1988 her example was followed by FIFe. Today Angora cats are still highly appreciated for their quality and are the pride of many European breeders.

Contrary to their counterparts, Turkish Angora usually loves the water.