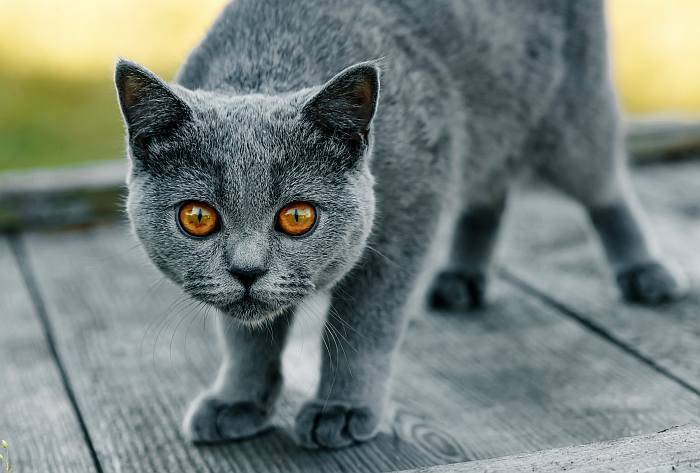 The Chartreuse is a sturdy cat with silver fur and copper eyes. Calm, serious and kind Pets that even know how to smile. It has long been common in France, the Chartreuse are the real pride of the country, and many breeders around the world. 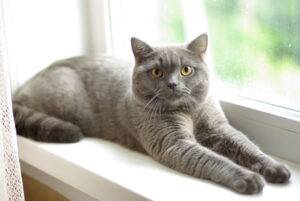 Chartreuse (other names: kartuzskaya, Cartesian) – sturdy cat of medium or large size. The weight of the specimens varies from 3 to 7.5 kg. Males generally larger than females. The appearance of the pet gives the impression of power.

The body of the Chartreuse strong, powerful, bones strong, muscles well developed. The legs are straight, strong, paws are compact, rounded (standard TICA) or wide (FIFe standard). The neck is short and thick. The head is three-dimensional, rounded, the shape close to an inverted trapezoid. Cheeks are full (especially in males). The transition from forehead to muzzle smooth, muzzle narrow, but not pointed. 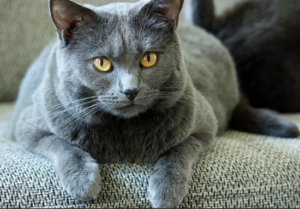 The expression of Chartreuse is very friendly, it seems that this cat is always smiling. Eyes large, rounded, shades of yellow and copper. The ears may be small or of medium size, narrow at base; erect, rounded at the tips. The tail is of medium length, broad at the base and gradually tapering to a rounded tip.

Cats ‘ fur is short, dense and shiny. The undercoat is slightly raised, so it seems easy fluffy. The special structure of the wool of the Chartreux prevents the penetration of water. Color: blue of all shades, strictly monochromatic. The most valuable is a light blue color. Skin a bluish tint. Chartreuse kittens are born spotted, however, by the age of one year all the marks disappear. The color of the eyes is set to 3 months, newborn kittens have blue-gray eyes. 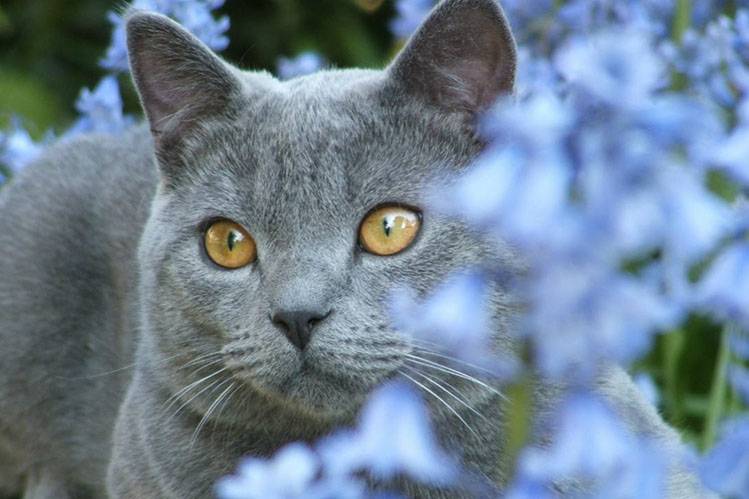 The Chartreux is a quiet cat with a balanced temperament, which is alien and Intrusive, and any aggression. The Chartreuse, do not scratch, does not bite, rarely maucat.

Possessing a balanced temperament, they easily stand alone and not need constant attention from the owners. However, to his master Chartreuse strongly tied. In the society of loved ones is traditionally reserved and even a little strict pet turns into a tender and sensitive Teddy bear. But future owners should note that the Chartreuse appreciates personal space and prefers to communicate when he has the mood. For example, obsessive pestering youngest members of the family of the Chartreuse will move firmly, but no joy it will bring.

Overall, the Chartreux is a strong cat for strong people who are close to such qualities as self-sufficiency and independence. 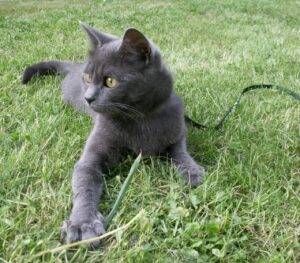 The Chartreuse, unpretentious, care standard. These Pets thrive in the housing conditions of detention, but for the fullness of life, it is desirable from time to time releasing them to walk around the fenced area. The Chartreuse has well-developed hunting instincts, and its fur is resistant to cold and moisture. In short, a silver hunter will be happy if you will allow him to feel a part of wild nature. In addition, exposure to the outdoors has a beneficial effect on the state of the coat of the Chartreux. But all things in moderation. Frequent exposure to bright sunlight can cause the appearance of brown tide wool.

Molt of the Chartreuse is quite abundant, and during molting cat comb preferably daily. The rest of the time is enough weekly brushing. 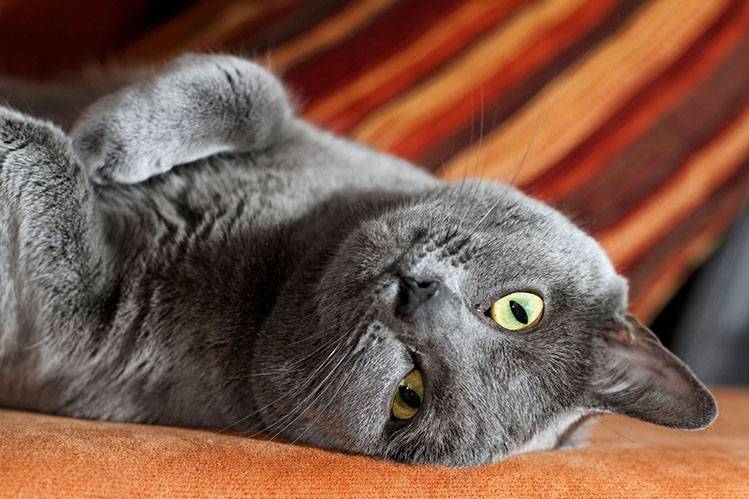 Homeland silver beauties are France. The history of the breed dates back several centuries, and the origins of Chartreuse is unknown. There is a version that they are hardy and adapted to weather ancestors have long lived on the territory of Iran, Syria, and Turkey and trophies were brought back to France by crusaders.

Serious breeding work on breeding of Chartreuse was developed in the early 20th century. It was the Persian cat, blue ash cat Bel-Il, etc. for the First time at the exhibition Chartreuse was introduced in 1931, and the adoption of the first official breed standard refers to the 1939 mu.

The old original breed Chartreuse is incredibly much appreciated in France and is considered to be its domain. Also, these cats are very popular in the United States, where they were introduced in 1970.