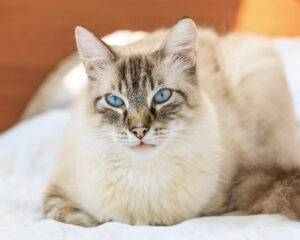 The sacred Burmese is a fairly large plush cat with dark blue eyes and pretty white socks. Thanks to the good-natured character, they are ideal for families with children and Pets. The Burmese sacred very very attached to their owners and impress with sensitivity and openness.

A Burmese sacred massive physique, elongate the torso, strong bones, well-developed and hard muscles. Legs strong, of medium length, the paws are compact and round. The neck is medium size, strong. The head is three-dimensional, rounded, the muzzle is wide, with prominent cheekbones and full cheeks. The eyes are a large, round, blue color. Ears of medium size, with rounded tips. The tail is of medium length, very fluffy. 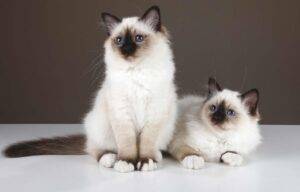 The coat is longer on the sides, chest and tail, short on face and legs and medium length on other parts of the body; smooth and silky, with a mild undercoat. The basic color from white to cream. Have a face mask on the face and pigmentation on the legs, ears and tail (pointed). Marks can be purple, cream, red, blue, gray-blue, chocolate and brown. The color markings are fully formed only in adulthood. Over time, the color darkens.

A Burmese sacred ideal, middle ground between the endless activity and phlegm. This is a very calm, balanced, but at the same time inquisitive and contact cat that easily finds common language not only with people but other cats and dogs.

Calm and good-natured, Burmese sacred – the ideal choice for families with children. She shares children’s games, however, don’t underestimate the personal space of the pet. The Burmese love the peace and quiet, and children need to explain that a resting cat will not be disturbed in any case. 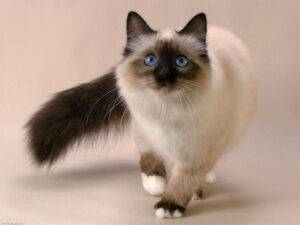 This breed can be safely attributed to the cat who walks by themselves are extremely rare. Burmese denotes no soul in your host and ready day and night to bask in his lap. She appreciates affection and care and are sincerely concerned with lack of attention. The loneliness of these sociable and affectionate cats tolerate pretty hard.

The Burmese sacred by nature have good health. They live on average 12-14 years.

The breed is fairly low maintenance and care. The long coat needs daily combing during molting, but the rest of the cats enough to brush just 1 time a week.

Due to the strong Constitution of the Burmese sacred full-bodied, therefore it is recommended to feed them only high-quality balanced rations and in the recommended amounts. 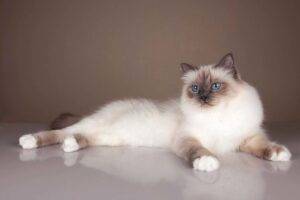 Home to the sacred Burmese is considered to be France, but the origin of the breed is still a matter of controversy. According to one version of a long-haired cat resembling the Siamese, were brought by the British from the temple of Lao-Tsun, the other in 1926 the first of the breed was presented at the exhibition breeder is French of Leotard.

However, the most realistic version of the Burmese sacred was put in 20 years as the result of crossing Siamese and long-haired cats, possibly Persian or Angora. In 1930 one of the first representatives of the breed became the absolute star of the largest exhibitions of cats.

In 1950, the breed is officially called “the Burmese sacred.” Today these cats are incredibly popular in England and the United States. 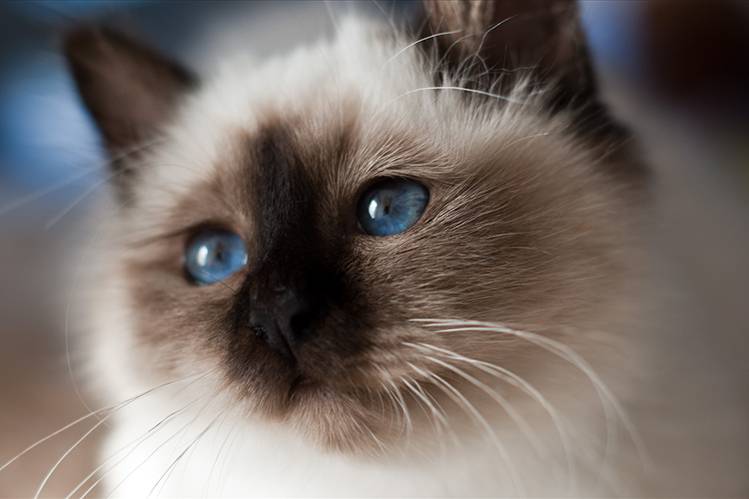