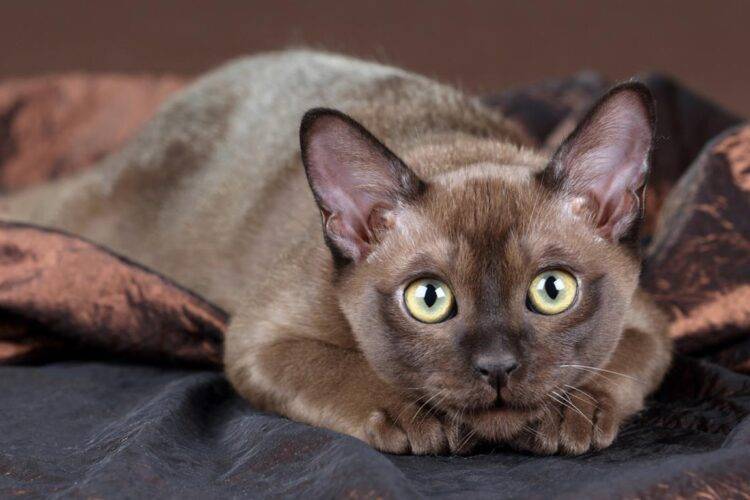 For boundless devotion, sociability and love Burmese cats are often called cats-dogs. However, if the spiritual qualities of these Pets do resemble man’s best friends, all of them look like exudes feline grace, elegance and unconditional confidence. 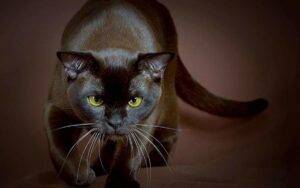 The Burmese are an elegant, graceful pet medium size with a short coat of solid colour. The weight of the cat varies from 3.5 to 6.5 kg. the Breed is represented by two types: American and English.

“Americans” have a strong Constitution, they have well-developed muscles, strong bones, broad, rounded head, while the body is quite compact. “British” is slightly more elegant than “Americans”, they have an elongated body of the Eastern format, the head is wedge-shaped, but their body not so elongated, like a Siamese cat.

Eyes Burmese cats are large and round, classic color: Golden yellow, eyes can be different colors, but always bright and saturated. Ears of medium size, erect, with rounded tips. The tail is straight, voluminous at the base and tapering to the tip, of medium length. 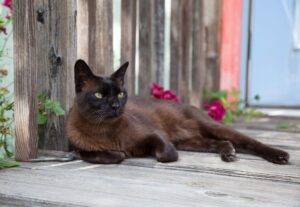 The coat is short, thick, dense, glossy and satin. The undercoat is almost absent. The coat is darker on the paws, tail and mask, medium on the sides and back, lightest on the belly. Whitecoat and markings are absent. Monochromatic color 4 varieties: brown, blue, chocolate and lilac (platinum). They can meet and other varieties of color, but they are only recognized in Europe.

Burmese cats are often called cat-dogs. This reputation they have earned through their sociability and strong attachment to the host. It seems to be near a loved one for Burmese cats are the meaning of life. She is very sensitive and contact easily captures the mood of others, loves to “talk” and flippers, are very difficult to tolerate loneliness. To be in the spotlight for her vital.

Burmese cats are very active and love to play, including children with whom these are sociable Pets, by the way, get along well. But with other cats Burmese can not find a common language, because they have quite a domineering character and expressed a desire for leadership.

These Pets never cease to amaze lively temperament and curiosity. Very brave, energetic and strong, Burmese cats are great friends who have much to learn from. Burmese are ideal Pets for the whole family and feel great in a small apartment, but from time to time it is desirable to release a walk in the walled garden, which is home of the predator would be able to feel unity with nature and to exercise their hunting instincts. 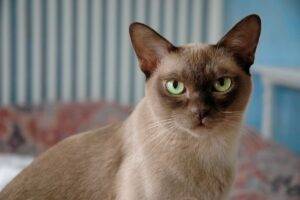 It is an ancient breed, characterized by good health. The life expectancy of Burmese cats averages 13-15 years with proper maintenance Pets often live up to 20.

The breed’s ancient history. Mention of the alleged Burmese ancestors of cats date back to the 14th century. Knew them in ancient Siam, and in the manuscripts on Buddhist temples of Burma in the 16th century, the Burmese cat was called “Raja”.

The first breed was imported to San Francisco in 1930. This cat called Wong Mau, she was a cross between a Burmese and a Siamese, i.e. a cat tokinsky. She had distinctive bright yellow eyes, and monochromatic color mahogany. In San Francisco, Wong Mau was bred to Siamese cat seal point, and kitten from that litter was crossed again with Wong Mau – so appeared first monochrome brown kittens, marked the beginning of the professional development of breed Burmese cats. In 1936 the breed was recognized.

Today, there are two types of Burmese cat: American and English, which differ from each other in a number of external signs. In General, the breed is very popular all over the world, and thanks to her there are such wonderful breeds like the Burmilla, Tiffany, Bombay, etc.