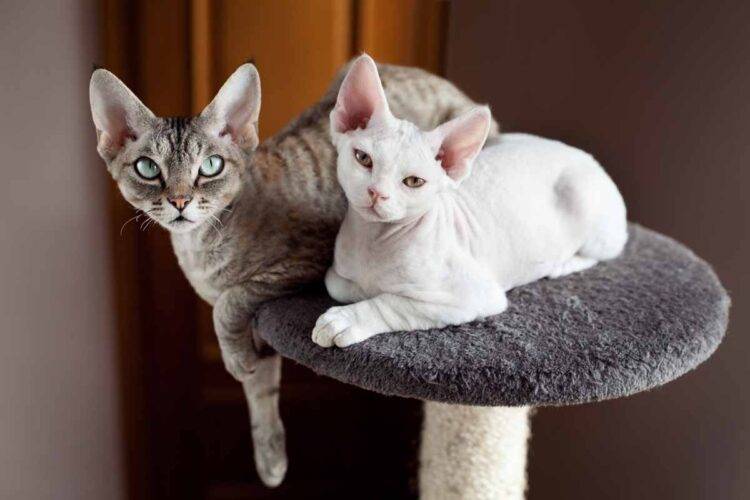 The Devon Rex is an unusual cat with sheep’s coat and funny ears of a bat. Sociable, cheerful and empathetic, they are the true family members and best friends both people and other cats (and even dogs).

The Devon Rex is a cat of medium size, weighing up to 4 kg, with the most that neither is original appearance. These Pets are very big ears, just like bats, and curly short hair, resembling the fur of a lamb.

Body type average, without the feeling of massiveness and severity. Bones strong, muscles well developed. Limbs long and slender, with the back longer than the front. The head is compact, has the shape of a blunt wedge. 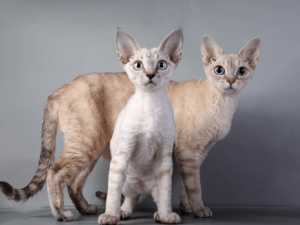 Short muzzle, with a pronounced transition from the forehead, the transition to the cheeks is also very clear. Eyes very large, oval, bright and clear, the color harmonizing with the coat colour. At the tip of a large, wide ear may be lynx brushes. The tail is long, thin and flexible.

The fur is short and wavy, reminiscent of a sheep’s coat. Meet cat, whose stomach is only tender fluff. Allowed all colors. 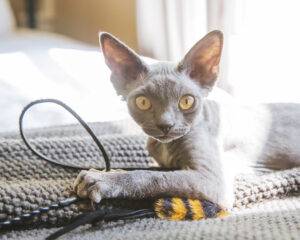 The Devon Rex is not as active as his brother Cornish, however, and it is famous for its lively and vivid temperament.

These cats are inquisitive and playful. They are loyal members of the family and best friends who can easily find a common language with all and thus remain self-sufficient and independent.

Despite a real gift to occupy yourself with interesting discoveries and games, Devon Rex cats don’t like being alone. They are much more comfortable when the house is there anyone else even in this time people mind their own business. This pet friendly easy to get along with other cats and dogs and gets along well with children.

In General, the Devon Rex is the kindest, empathetic and trusting Pets that seem to always seemed to sparkle with happiness. Their optimism and love of life can only envy! 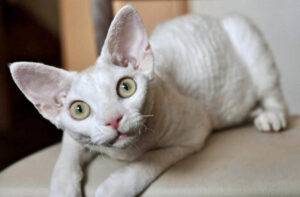 Devon Rex cats do not like the cold and therefore feel better in terms of room maintenance. They have good health, however, there is a risk of hereditary diseases. Therefore, before choosing a kitten we recommend that you read the genealogy of his parents.

The wavy hair Devon Rex enough weekly brushing. These cats have almost no shedding, whereby the care for them becomes easier. From time to time, the Devon Rex must be washed with the use of special tools. Check the condition of the ears of a cat, they often accumulate ear wax, which must be carefully removed with a special lotion to clean the ears. 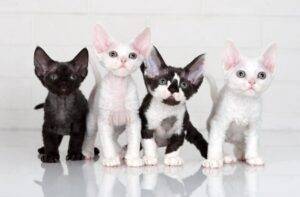 Home to the Devon Rex is UK. It was here in 1960, in the English County Devonshire, was discovered purebred kitten with an unusual curly coat.

Sheltered him, and after some time crossed with the tri-color cat. Born kitty was also curly. Thus began a new line of breeding. However, binding with the Cornish Rex has not brought results in the breeding work and was involved in many other purebred and non-pedigreed cats.

In the 60s, the efforts of the English, American and French breeders new breed to create still managed, and in 1967 it received official recognition in FIFe. In the US, Cornish and Devon Rex for a long time considered the same breed, however, in 1979 the differences of these rocks has finally been recognized and decorated. The adoption of the official standard applies to 1988 (TICA).