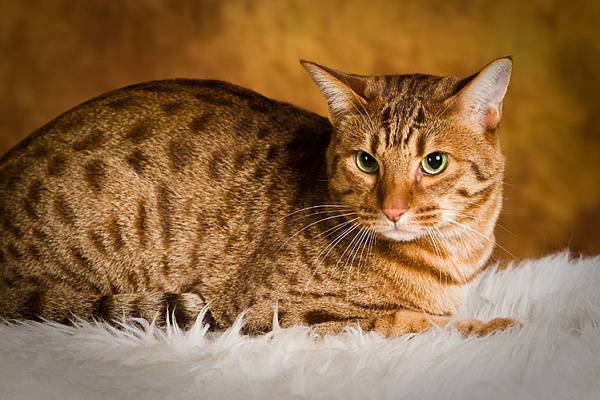 Spotted athletes with expressive almond-shaped eyes, and an inexhaustible source of energy. Pets are deeply loyal to the host and favorable to the children. A born huntress, decorating the house with their grace. Meet  – spotted Siamese cat hails from the United States 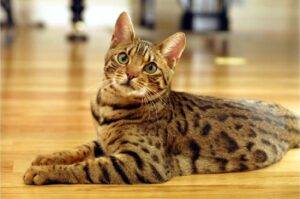 The Ocicat cat is a small animal that looks like an ocelot. The Motherland of the breed, the Ocicat is the United States of America, where it was first bred, individuals. The breed was the result of crossing three cats in 1964: American Shorthair, Siamese and Abyssinian. The purpose of the experiment was to produce a new wild cat that is different docile nature. The recognition of the breed was only in 1986 and 1989, there was the official publication of the TICA. Today cats breed Ocicat popular not only in America but also in many countries of Europe and in Russia.

Cat society has an unusual appearance. Association TICA has developed a standard, having familiarized with which you can easily distinguish a purebred animal from a regular household cat.

Among the exterior features of the breed:

The wool is soft and smooth, with a pronounced sheen. Every hair cover has multiple colored stripes, resulting in an unusual spotted pelt. The most remarkable feature is the location of dark hairs on the forehead, simulating the letter “M”. It should be noted that the spotted color in the head region is expressed clearly. Large patches are ripples, but in the spine lined up in a row. On the tail is a horizontal line that towards the end of the tail looks like spots.

Today, there are 12 basic colors. Among the most popular:

Interestingly, in the color of practically white color dominates: the inclusions are located only in the region of the eyes in the upper part of the neck and on the chin. 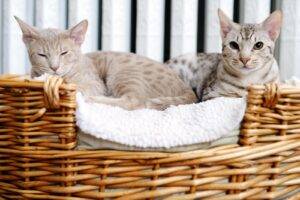 Especially interesting Pets. They can simultaneously be active animals with well-developed hunting qualities and to show submission, if we are talking about home maintenance. Animals quite quickly attached to a host, they are difficult to endure the loneliness and constant need of human society, so they shouldn’t have people who spend little time at home.

Voice – melodic, quiet. Pets are smart enough and inquisitive, making them easy to teach to different living habits (visits to the toilet, commands and others). They are distinguished by a naughty and playful character, having decided to get the Ocicat, the owner will not face “lying” lifestyle pet.

Cat of the Ocicat is not distinguished by the favor of the Intrusive actions of others, and in rare cases can show aggression. As a rule, she tries to find a secluded place to avoid unpleasant contacts. Families that have small children, it is best to give preference to other breeds.

They do not tolerate competition with other dominant cats. However, easily find a common language with other animals because of their natural curiosity – for example, dogs, turtles, parrots. They show love to toys and high subjects. 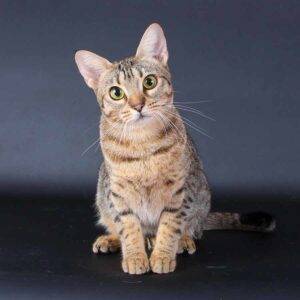 Pet is distinguished by good health and increased stamina. With proper care, the life expectancy of your pet can be up to 18 years. However, some individuals may have a genetic predisposition to heart disease that is corrected by treatment. There is a predisposition to dental caries, which if not prevention can go to periodontal disease.

To prevent disease of the mouth veterinary doctors advise brushing teeth pet with a special brush with a small amount of special paste.

Ociety does not require complex care. Animal hair, not much shedding. To maintain it in a tidy condition by simple weekly brushing. Bathe them frequently does not follow, as Pets do not tolerate water treatments. Use regular shampoo is not recommended, better to use special products for cats. If you have made a choice in favor of this kitten, you should perform regular hygiene of eyes and ears to prevent diseases.

With regard to the lifestyle of pet, preference should be given fresh air in the warm time of the year and active games. It is very important to ensure that the cat did not eat something while walking on the road – this could adversely affect her health.

The breed is distinguished by cleanliness, so kitty litter is promptly replaced by a new one, otherwise, the pet may simply be disdained. Ideally, if the house will be two trays. 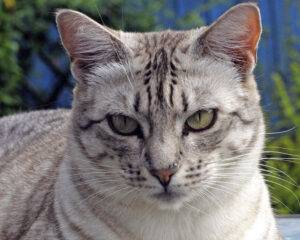 A key component of the pet’s health is a proper and balanced diet. In the everyday diet should include feed rich in vitamins and microelements.

Experienced breeders recommend to use for feeding prepared rations super-premium class, and if you choose the natural type of feeding, then give your cat special vitamins.

Among the products that should be excluded from the diet of species of river fish, milk, fried and sweet, too salty foods. In any case, you cannot give your pet too hot or cold meals from natural foods – the portions should be warm. Do not mix natural products and dry food.

It is very important to make periodic visits to the vet and vaccinations, treatment of parasites in time.

Choosing a place for the rest of the Ocicat in the apartment, it is best to give preference to secluded corners and sparsely populated areas – where the cat will be most comfortable. It can be used as a house and a classical bench. Be sure to have a scratching post to avoid damage to furniture and Wallpaper.