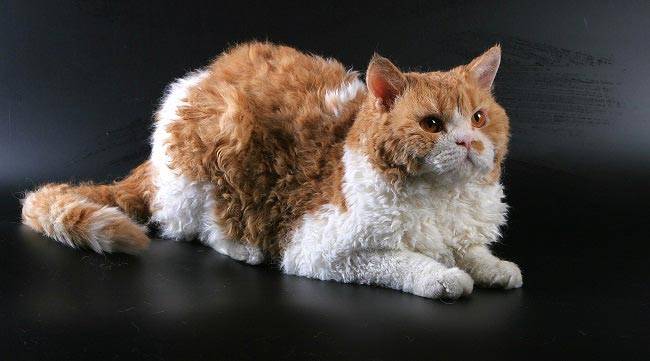 Cats with a striking appearance, with his coat resembling poodles or sheep. Close relatives of the noble Persian cats. Kind and sociable Pets with a calm temperament. The best companions for children. 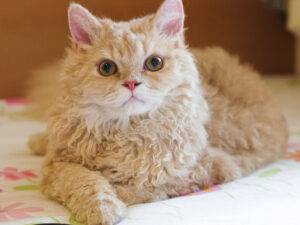 Selkirk Rex (or another name, the cat-sheep) – a charming pet with sheep fur, the furry breed of cats. The Selkirk Rex’s thick body and heavy bone. This cat is medium in size, a maximum weight of up to 5 kg.

The head of the breed is medium in size, short muzzle and square, cheeks full and saggy. Whiskers and eyebrows are curly, as the hair. The eyes are a large, round, color match with the main color. Ears of medium size, with slightly rounded tips. The tail is thick, medium length, tip rounded. 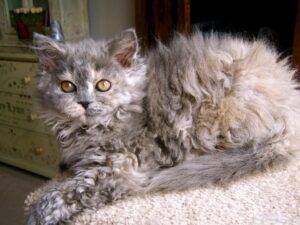 The coat of the Selkirk Rex is the business card of the breed – very thick and curly, with a dense undercoat. Swirls decorated, private. And the coat develops before 2 years of age. Kittens are born with already curly hair, but then she straightens, and curls appear again approximately 10 months.

Selkirk Rex cats come in shorthaired and longhaired. The color can be any, but the most valuable are the clear colors: white, cream, seal-point links etc.

The Selkirk Rex is a fairly quiet cat with a balanced temperament. They are good-natured and friendly, get along well with other pets and friendly with children, being recognized as one of the most “family” of breeds.

In spite of natural restraint, Selkirk Rex cats love to play and are happy to support fun their two-legged little friends.

Selkirk Rexes are comfortable in terms of room maintenance. It’s not just the Pets, but real family members, catching the mood of the owners and exudes warmth and comfort. 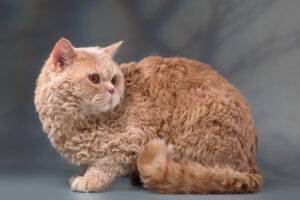 The breed is characterized by good health and has no hereditary diseases. However, cats may face hip dysplasia and feline hypertrophic cardiomyopathy, therefore it is recommended that buy kittens only from reliable breeders do not neglect the rules of selection.

With proper care the average life expectancy of the Selkirk Rex is 15 years.

Despite a striking shaggy coat, care for the Selkirk Rex is very easy. Surprisingly, much easier than many other breeds. Thick wool in its structure, is not prone to tangles so combing it a couple of times a month. Before participating in a cat show wash with the use of special tools. The rest of the care of the breed standard.

The Selkirk Rex is an amazing and slightly complicated story and named the species in honor of the Selkirk Mountains (USA), near which it was derived. 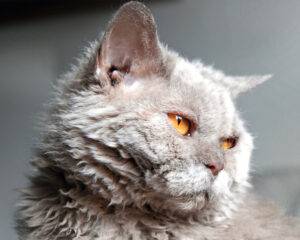 The history of Pets, fur reminiscent of poodles and sheep, began in the ‘ 80s, when a cat crossed with a cat with a curly coat, had an unusual dropping. One of the kittens went to the father and was born the same curly, while the other appeared smooth. Special interested in kitten breeder Persian cats, which soon became his mistress. And later, when the kitten turned into an adult cat, it is used in breeding work.

Thus, the ancestors of the Selkirk Rex are a nameless cat with sleek and curly hair and noble members of the Persian breed.

Today, the Selkirk Rex is incredibly popular in the US but in Europe remains a rarity.