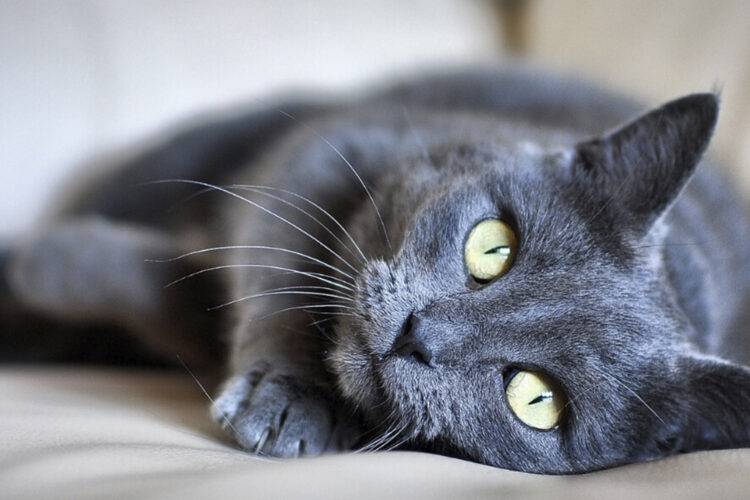 Korat is a graceful cat with green eyes and silver fur. A true aristocrat who values ​​the private atmosphere and brings harmony and good luck to the house. This breed is considered a talisman.

Korat is an extremely beautiful cat with blue fur and bright green eyes. Size medium, weight ranges from 2.5 to 4.5 kg.

Korata’s body is muscular. The head is heart-shaped (seen from the front), and the neck is long. The eyes are large and round. Amber eye color is allowed in young cats because the final color is established at the age of 2 years. The ears are large with slightly rounded tips. The tail is of medium length.

The coat is short, dense, very shiny, no undercoat. Paw pads are dark blue or pale purple with a pink tinge. 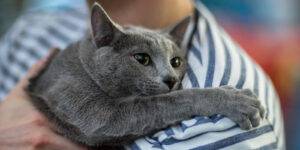 Korat is an aristocratic and intelligent breed of cat, they are graceful, elegant and playful, but carefully avoid noise, preferring a relaxed atmosphere.

Strangers and other pets are not allowed in their personal space. Due to his balanced character, Korat never scratches for no apparent reason.

Along with a loving owner, an independent, caring cat embodies affection and tenderness. Korat likes to fall asleep on his master’s lap, reacts with a loud purr to scratching behind his ear, incredibly appreciates care and kindness. Observing the interaction with family members, you begin to think that it is simply impossible to find a more sensitive pet.

Korat is firmly attached to the owner and misses if he is alone for a long time. 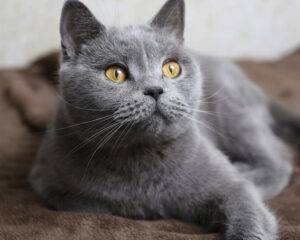 The breed is characterized by good health and an excellent immune system, but has a tendency to atelosteogenesis of the first and second types (hereditary disease). When buying a kitten, pay special attention to the study of his pedigree.

The average lifespan of a korata is 13 years.

Caring for the carat is quite simple, this unpretentious pet does not require special procedures.

It is enough to comb the wool once a week. If necessary, the cat should be bathed with a special shampoo. The nails are shortened once a month because there is a tendency to grow. The ears are cleaned as needed.

Remember to visit your vet periodically and have routine vaccinations and treatments for parasites. Also, follow a proper diet – it is a guarantee of health and longevity of your pet.

Thailand is considered to be the birthplace of Korat. This is one of the few breeds that originated in the wild, and it is known since the 14th century. The breed is named after the province in which these cats are still considered talismans.

At the end of the 19th century Korat was brought to Great Britain. Varieties of blue Siamese cats were presented at the exhibitions and recognized as a separate breed. However, due to the efforts of breeders and experts in 1966, the breed was recognized by the CFA in 1966 – TICA, and FIFe in 1972.

Today, Korats are most common in the United States,  Europe.