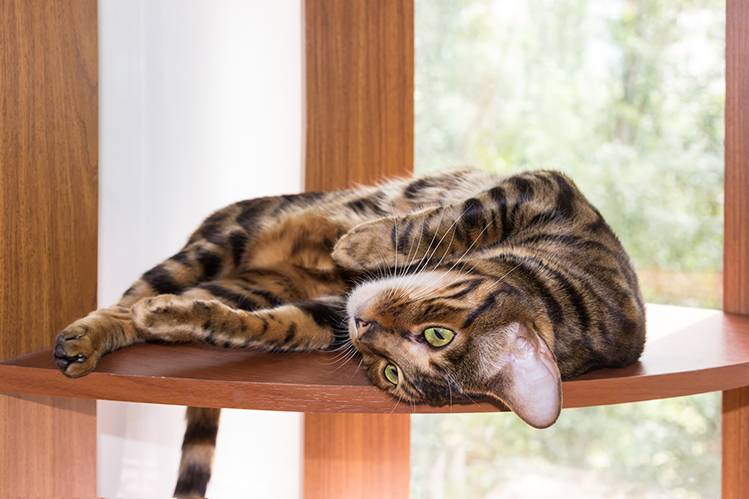 Meet the tiger home with a good-natured disposition! 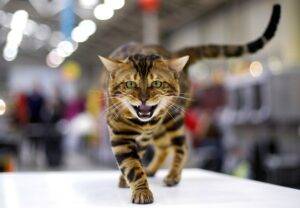 Toyger is a graceful big cat, resembling a tiger. The weight of the specimen can reach 10 kg. the Breed is very young, and the standard continues to take shape.

For a fixed standard of Toygers elongated strong body, developed muscles, broad chest, strong legs, muscular neck. Head of medium size, slightly elongated muzzle. The strong chin, the cheekbones well-defined, the nose broadens towards the tip. Eyes of medium size, very expressive. Ears set wide apart, small. Tassels are not allowed. At this time, is working on a more rounded shape of the ears. The tail is very long, thick, with a rounded tip.

The coat of the Toyger is short, straight, dense and very soft. The color resembles a tiger and is the main advantage of the breed. Primary color – gold. The body has clearly defined dark vertical bands on the face of the preferred pattern butterfly bright circles around the eyes. The hair on the abdomen is lighter, the tip of the tail is dark. In General, the combination of colors, contrast and very effective. 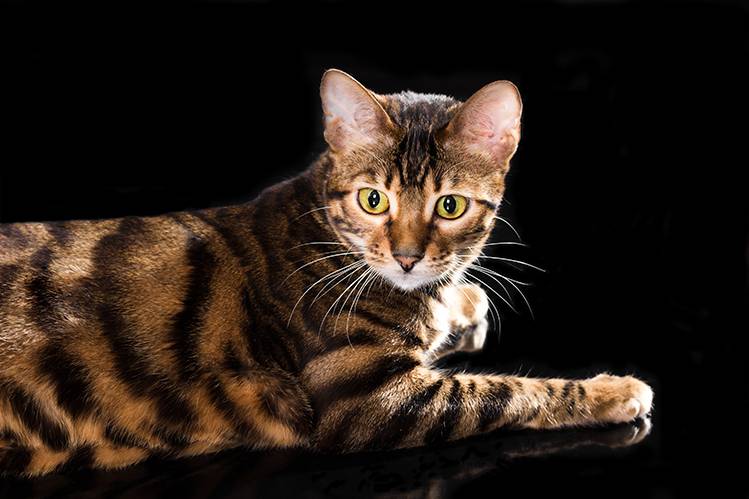 If Toyger is formed in vivo, most likely, he would be too independent and wild. But on the breed worked as professional breeders, who gave her the best quality pet. So the big cat with a hard exterior is actually very kind and sociable.

The Toygers great character. They are curious and sociable, I love to be the center of attention, enjoy playing with children, easily find a common language with other animals, happy to meet guests. These positive Pets never fighting for the lead, not to beg for attention and praise, not capricious and not dirty tricks – for this, they are too self-sufficient. Although toygers love and affection, they will always find something to occupy themselves and will not be imposed. They have a balanced temperament and a sharp mind, and the world has not yet met toyger, which would hurt the child.

Active toyger will be comfortable in a spacious room with lots of toys, claw-point, loopholes, etc. of Course, to transform the apartment into the jungle not necessarily – although the toyger would appreciate it very much!

Interestingly, the majority of toygers just love water and often spend time in the bathroom. Don’t be surprised if your furry friend will fall to you in the tub, or climb into the shower. Many toygers swim and lie in the sink under running water. In short, these cats know how to enjoy life!

Breeders tried to make the toygers good health – and they succeeded. The breed is not a fixed genetic disease.

However, good genetics is not a panacea. Pet’s health depends on the quality of maintenance and care.

The average life expectancy of toygers is 15 years.

Toygers – the perfect pet cats. Care standard. Thick wool is enough to comb once a week.

Emphasis is placed on physical activity: its have a toyger should be a lot. Ideally, from time to time the cat needs to produce to run the infield. Walk (in safety) are these Pets good.

Toyger – this young and very valuable breed. His appearance is obliged to American Judy Sugden, who in the 90s decided to create a home version of the tigers. Selection work involved and other Bengal cats with markings similar to tiger. Through hard work geneticists were able to reinforce the desired color, and in 2000, the toygers received the status of a new breed.

In 1993, a new cat breed toyger was recognized by TICA (the status of “to register”), and in 2007 received all rights to participate in exhibitions.

The name of the breed merged the two words “toy” (toy) and “tiger” (tiger). 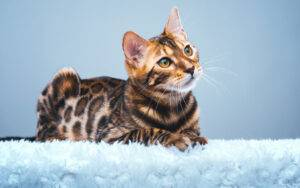 Interestingly, the Creator of the breed, Judy Sugden is the daughter of Jean mill, who previously gave the world of Bengal cats. Thus, the daughter continued the tradition of the mother. Of course, the toygers is not yet as widespread as the Bengals, but it is a very valuable and expensive dog that is just beginning to gain popularity.